Lisa Hanawalt lives in Brooklyn and does illustrations + funnies for publications like the New York Times, McSweeney’s, Vice, and Chronicle Books. She’s best known for her comic book series I Want You.

Midterms got you going to the bathroom out of anxiety? We’re continuing our series on bathrooms around campus with our third installment, and this time, we’re taking you to the second floor of Pupin (for when you’re SEAS-ed with cramps and gas).

The most private bathroom you could ever hope for. You could have the most explosive, sonorous diarrhea and not even feel a speck of shame. You feel like you’re in another dimension, free from the judgments of other bathroom-goers.

The View (windows? scribbles on the walls?)

Not one of its highlights. There’s a window that allows some soothing natural light, but you can’t really see much out of it.

Convenience (is it easy to find, or out of your way?)

It’s in Pupin on the second floor, so not super convenient. It’s worth the trek, though, if you fear offending/desecrating any other bathrooms on campus.

Traffic (are there a lot of people using it?)

Nope.  It looks like a closet from the outside so most people do not even know it exists. Just casually walk in as if you need a mop or a lightbulb and no one will be the wiser to the grumbling below.

It’s super clean and looks like a spaceship, so that’s cool.

5 stars.  A paragon of pooping perfection. MotherHydra
reply
Good ol' pluperfect tense, where you been dawg? This brings me back to memorizing all those conjugation tables for active and passive verbs.
Space City, USA

An ode to the chairs helping us get through each day on campus.

The Question Of Faculty Inclusion In The Sexual Respect Program by Eric Cohn
Sunday March 1st, 2015 at 10:31 AM

Recently, I contacted Dean Kromm asking her whether faculty and staff are required to go through any sort of sexual respect training, as is now required for students. In an official university statement from Associate Vice President for Media Relations Robert Hornsby, I learned that, although staff are required to go through some sort of sexual respect training, faculty are only “recommended” to do so. The university’s full statement can be read below:

“The first phase of the new sexual respect education program is geared to students. However, the University does require awareness and prevention training for staff on harassment and discrimination, which is also recommended for faculty. We are in process of reviewing and updating our training modules regarding this issue to best serve the entire campus community.”

My inquiry began after a tip sent to Bwog by a student who wished to remain anonymous alleging sexual harassment complaints against a particular professor since 2007. In addition to the concerns raised by student groupsabout Columbia’s new sexual respect program, this tip critiqued Columbia for its lack of a comprehensive  sexual respect program for faculty and staff.

The tipster sent us a series of course reviews dating from 2003, highlighting the numerous complaints of sexual harassment and other inappropriate behavior from the professor. Our tipster requested that we omit the name of the professor and his department out of concern  that the department might attempt to retaliate against her.

According to the reviews, the professor inquired daily about the designs on students’ shirts, which “made several of the female students uncomfortable.” He made “inappropriate comments about student’s attire (graphic shirts, jewelry etc.),” and even pointed out that “a student might be showing more than they want…when they bend over,” which students found “not appropriate.” The professor’s lectures were also apparently laden with “racist” comments and “offensive” references to “female intuition.”

Although these student complaints are certainly problematic, they also raise questions about the reach and effectiveness of Columbia’s new sexual respect program. And our tipster’s situation is by no means an isolated incident. Within the past few years, Columbia has faced legal action from several students alleging sexual harassment from professors. In 2012, a doctoral student sued the school for ignoring his complaints against a professor at Columbia’s College of Physicians and Surgeons. In 2013, two former graduate students sued Columbia after President Bollinger’s office gave them “a runaround” following complaints against two senior Columbia faculty.

Although I recognize that the new sexual respect program is still in its early first phase, Columbia must recognize that sexual assault issues are not limited to students. Sexual harassment from professors is also a problem, and Columbia’s new efforts should address it. 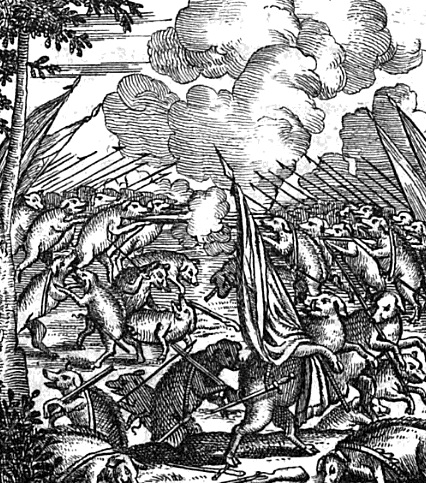 In 1830, a virtuoso Latin poet writing under the pseudonym Publius Porcius Poeta wrote hundreds of lines of poetry in a book called Pugna Porcorum, or The Battle of the Pigs. What makes the poetry particularly notable is not so much its fanciful subject or mock-heroic frontispiece (shown above). Instead, the most remarkable feature of the Pugna is that every word in the poem, including those in its occasional footnotes, begins with the letter ‘p': 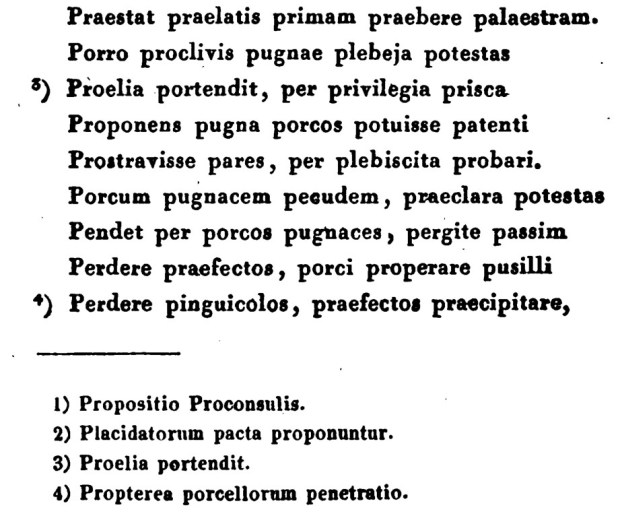 The Pugna Porcorum, like tens of thousands of other Latin texts, is not available in translation, nor is the Latin itself easily accessible. Yes, Hathi Trust, The Internet Archive, and Google Books have digitized many of these texts, but they’re only available as images or PDFs. And to find the Pugna, you need to know beforehand what you’re hunting for. (I first heard of the Pugna while studying with Reggie Foster in 2006.)

I’ve started a project called GitClassics to create plaintext versions of obscure but noteworthy Latin texts, starting with the Pugna Porcorum. It aims to make “weird Latin” just as readily available as Vergil and Horace. The project uses GitHub to allow collaborative text editing without the mayhem of a shared Google document. If you’ve never used GitHub before (most classicists haven’t), you should head over to GitHub Guides to learn a little more about how the site allows people to collaborate on big projects. And if you work at a university, you may want to ask a friend in the sciences or digital humanities to help you get started.

(Sure, there might be a way to do these transcriptions with some very slick OCR. But OCR doesn’t give entirely accurate results, and it has a hard time dealing with some features of printed books, such as footnotes. Take a look at the OCR-produced text of the Pugna over at the Internet Archive, and you’ll see what I mean.)

Having only image-based versions of Latin texts makes them harder to search or incorporate into digital humanities projects. It’s also good to spend some time with Latin just for the sake of becoming more comfortable with the language. And after we transcribe the Pugna, I’m hoping that people will start to work on a translation together. I’ll admit, I’ve never done a collaborate translation on the Internet (even though people always talk about how it’s possible), and it might not work so well. But if GitClassics just becomes the chaotic corner of GitHub where everyone makes alliterative jokes about pigs with pistols instead of patching Python, I’m all for it.

Head over to the GitClassics page or the repository for more porcine pleasantries.